The Bamiyan Valley, enclosed in the high mountains of the Hindu Kush in central highlands of Afghanistan, was a vital link in the trade routes that spanned from China to India via ancient Bactria (present-day Afghanistan). The valley, at an altitude of 2,500 metres, follows the line of the Bamiyan River, and has been inhabited since at least the 3rd century BC. The passage of merchants through this natural corridor from the earliest days of the Silk Roads brought languages, beliefs and traditions together here, and contributed to its development as a major religious and cultural centre throughout the Middle Ages.

The rise of Bamiyan was closely connected with spread of Buddhism across Central Asia, and that in turn was linked to the political and economic currents of that time. Early in the first century AD, a semi-nomadic tribe called the Kushans swept out of Bactria, overpowering the rulers of the hill-tribes and what remained of the Graeco-Bactrian kingdoms. They established a large empire that endured for three centuries and reached from the shores of the Caspian Sea deep into northern India. The Kushans made themselves the unavoidable middlemen between China, India and Rome, and prospered on the revenues of the Silk Road. In so doing, they fostered a syncretic culture, in which tribal traditions from Central Asia fused with artistic conventions derived from the Hellenized Mediterranean and with the ideologies coming from Buddhist India, as reflected in the remarkable cultural legacy to be found in Bamiyan.

Buddhism was expanding rapidly in the 1st to 5th centuries AD, and the kingdom of Gandhara in northern Pakistan and northeastern Afghanistan became a centre of Buddhist learning and culture, in particular, innovative sculpture, under the Kushans. The Buddha statues of Bamiyan, with their Roman draperies, belong to the Gandharan idiom, as do the numerous stupas scattered throughout the Afghan mountains, built to house relics of the Buddha and of later saints. Guldara, in a remote valley southeast of Kabul, is a noteworthy example with Hellenistic features; a more typical one is the stupa of Tope Darra, in the mountains north of the city.

Evidence suggests that Buddhist monks settled in the Bamiyan Valley early in Kushan times, and it quickly grew into a major monastic centre, repeatedly mentioned in Chinese texts from the 5th century AD onwards. The pilgrim Fa Hsien passed through in about 400 AD, and witnessed a ceremonial conclave of a thousand monks in the presence of the king. The celebrated traveller Xuanzang visited in 632 AD, and described that same solemn assembly. He was impressed by the monks’ devotion, and mentions the giant standing Buddhas. A century later a monk from Korea, Huichao (727 AD) describes Bamiyan as an independent Buddhist state, perhaps under Sassanian suzerainty. An indigenous dynasty that adhered to Buddhism survived until 970 AD.

Traces of this Buddhist heritage in Bamiyan can be most clearly seen in the two colossal niches in the cliff side that contained large standing Buddha figures, thought to date from the 5th century, and standing 55m and 38m high respectively, which were destroyed by the Taliban in 2001. The niches are flanked by dozens of artificial caves, many adorned with frescoes, all part of a huge monastic ensemble dating from the 3rd to 5th century AD. Scholars have discerned stylistic influences from Gupta India and Sassanian Iran, as well as Hellenistic artistic styles, a testimony to the diversity of influences that shaped the region. In several of the caves and niches, often linked by galleries, there are remains of wall paintings and seated Buddha figures. In nearby valleys, over one hundred other caves have been found,  including the Kakrak Valley Caves, some 3 kilometers south-east of the Bamiyan, containing fragments of a 10m tall standing Buddha figure and a sanctuary with painted decorations from the Sassanian period. The caves of Qoul-i Akram and Lalai Ghami, some 2 kilometers from Bamiyan, also containing similar decorative features.

In 970 AD, Bamiyan was conquered by the rulers of Ghazni (in southern Afghanistan), who brought Islam to their domains. Muslim kings then ruled for another two centuries, their reach at times extending to the Oxus river, and Islamic art and architecture reached its pinnacle in the city in the 11th century AD, under the rule of Sultan Mahmud of Chazna (998- 1030). Subsequently, the Ghurids, who ruled the city from 1155 to 1212, constructed a new royal residence, the fortified citadel on the plateau facing the two Buddhas, whose ruins are now known as Shahr-i-Ghulghulah, (variously translated as the City of Silence, or of Screams). Bamiyan was protected by watchtowers and by two massive outlying fortresses.

Despite these fortifications however, the city was entirely destroyed at the hands of the Mongols in 1221, and the Buddhist monasteries looted. Recovery was slow; it was not until the 15th century that rebuilding took place, under the Timurid kings, and the valley subsequently became a stronghold of the Afghan monarchy. The giant statues were defaced in the 17th century by the Mughal emperor Aurangzeb, and the valley abandoned to the use of local herders and farmers by the 19th century. 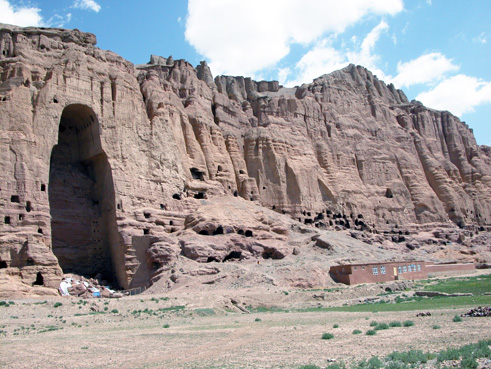 ©UNESCO / One of the niches in Bamiyan Valley 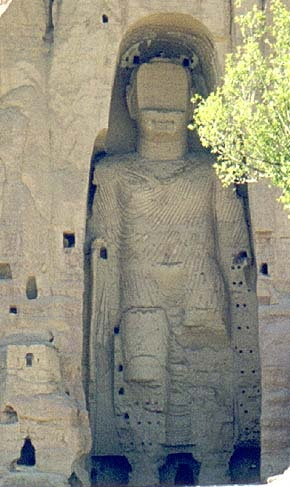 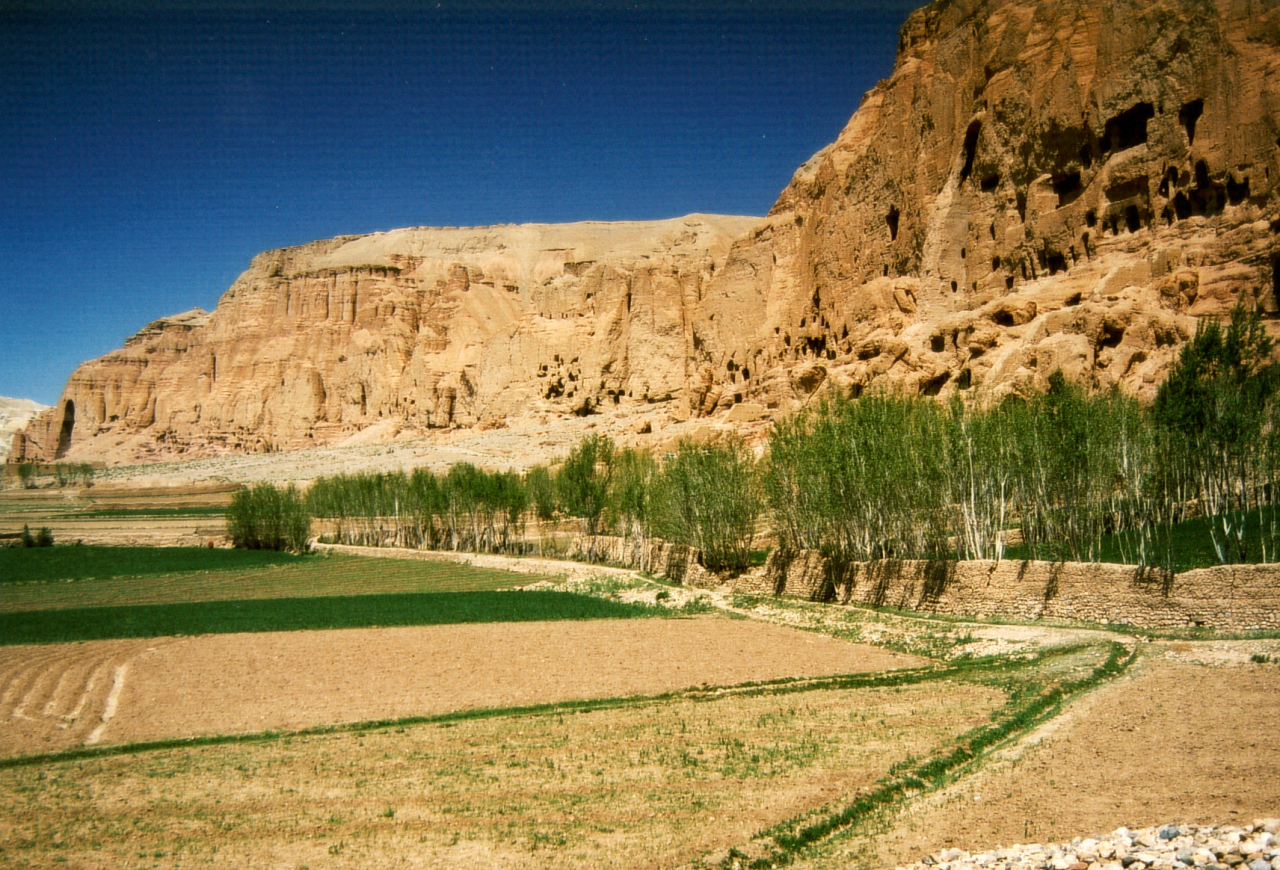 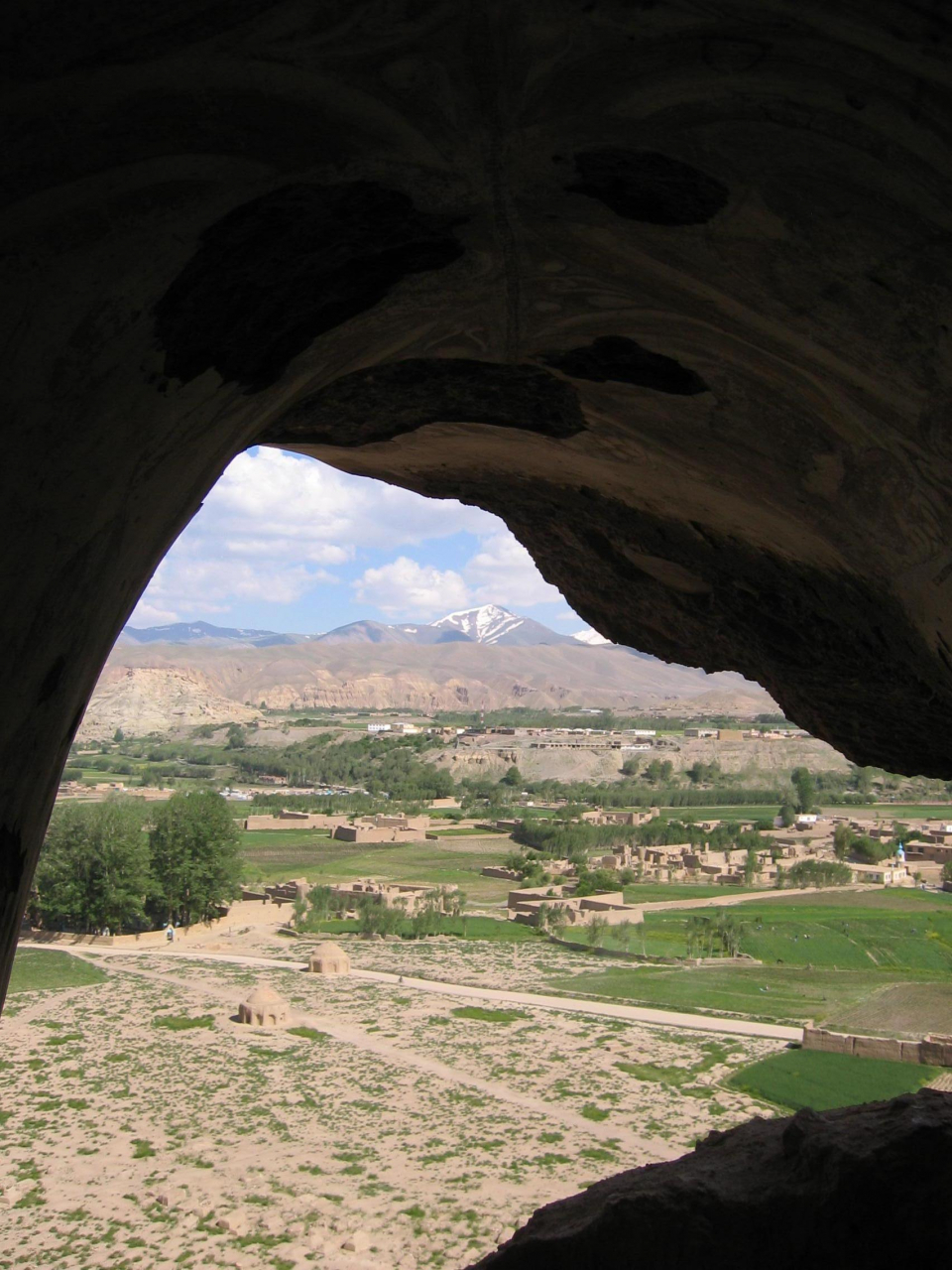 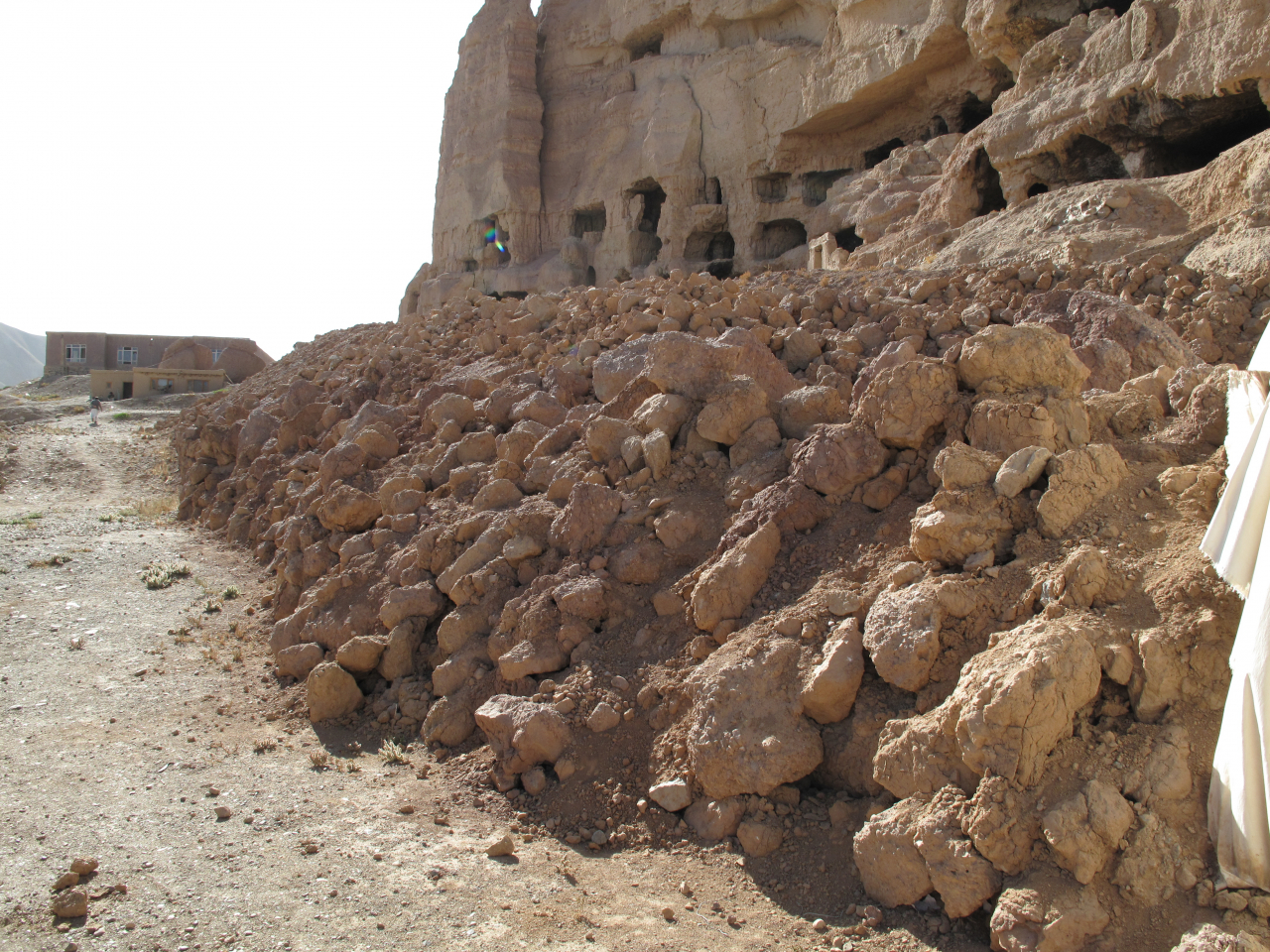 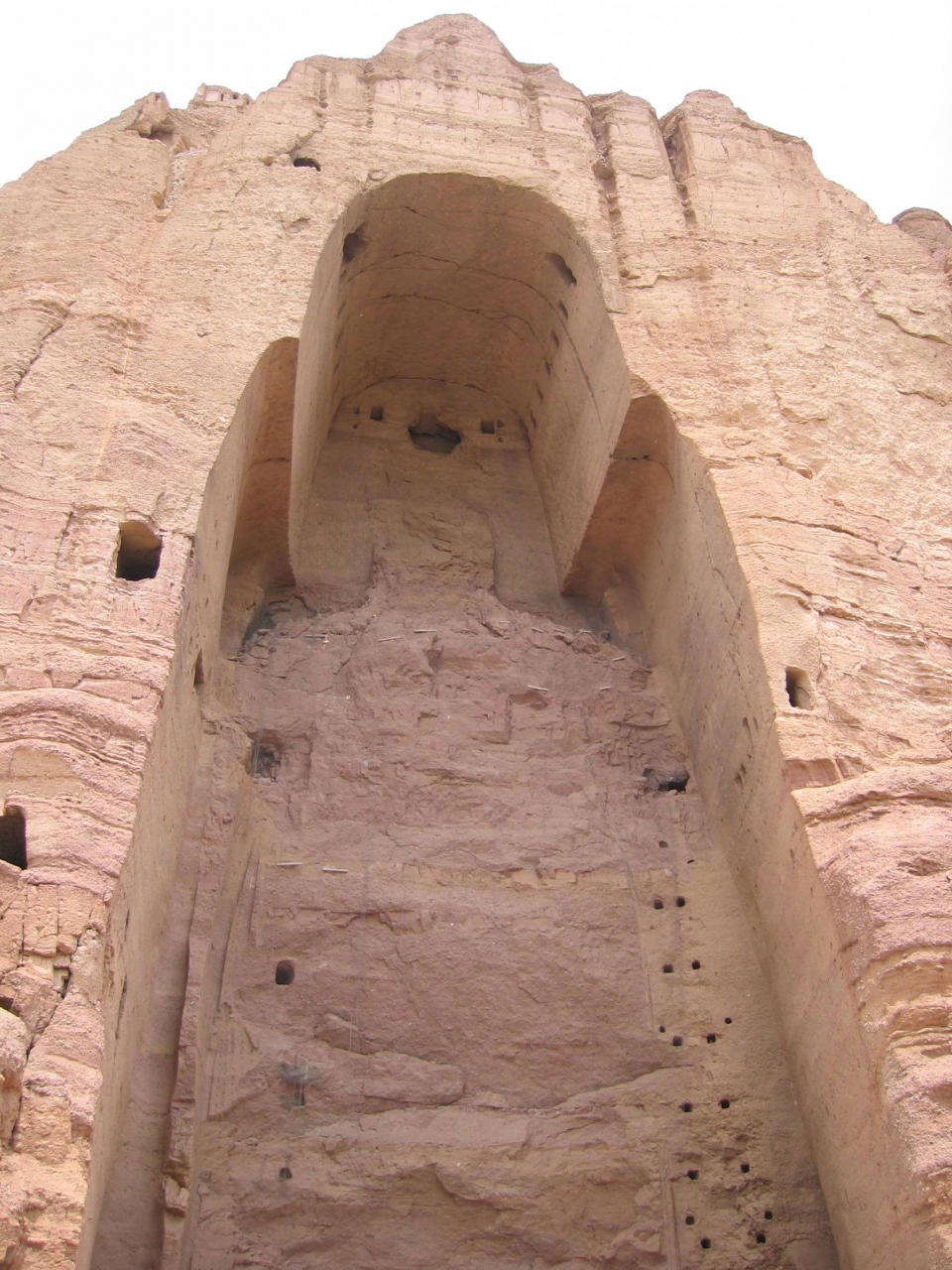 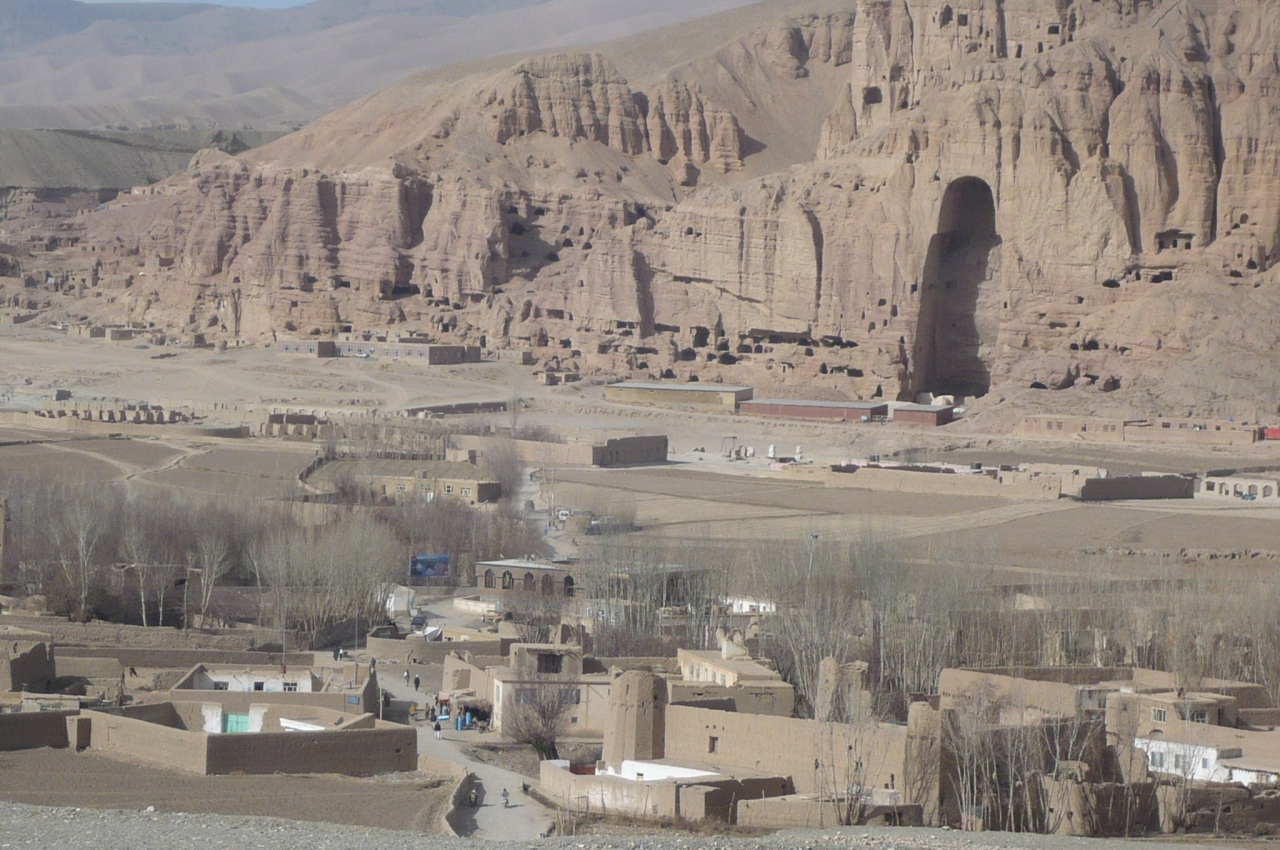