The historic city of Bukhara has been a hub for traders and travellers since its foundation over 2,000 years ago. Situated on an oasis in the Zerafshan river delta in central Uzbekistan, Bukhara lies on a crossroads of ancient trade routes that stretched across Central Asia, and was a vital stopping point for merchants on the edge of the Kyzyl Kum (Red Sand) and Kara Kum (Black Sand) deserts.  It was one of the most prosperous cities in Central Asia throughout the Middle Ages, and became a centre not only for exchange between merchants but also for culture, scholarship and religious studies. Bukhara also contributed many locally produced goods that enriched Silk Road trade, and was particularly renowned for its textile industry. Karakul lambs' fleeces, silk, cotton, leather, carpets and clothing were all traded from Bukhara, as well as gold embroidery and metal work, and many of these crafts are still practised in the city today.

Bukhara's ancient history was closely intertwined with the growth of the Silk Roads through Central Asia. Indeed, a settlement on the site of Bukhara has been discovered dating from as early as the 2nd millennium BC, and the city grew up nourished by the merchants that arrived from Persia, India, China, and Russia as well as those travelling east from the Caspian Sea and beyond. Its geographical situation, on the edge of the deserts but also close to Uzbekistan’s most prosperous agricultural region, meant that Bukhara was a popular and important resting point in the development of these routes.

Following the Arab conquest of the city in 709 AD, Bukhara also became a major cultural and religious centre, and was chosen by the Emir Ismail ibn Amad to be the capital city for the independent Samanid kingdom in 892. The Emir’s tomb, built in Bukhara in the early 10th century, is one of the most striking and well preserved examples of the architecture of the Muslim world from this period. The city increasingly attracted intellectuals and religious scholars, gaining a reputation as a centre of Islamic learning, and so earned the title of Bukhoro-i-Sharif, or "Noble Bukhara". The scholars and students from across the Muslim world who gathered in the city to learn and teach were themselves partaking in travel along the Silk Roads, and brought their own cultures and ideas with them. The city continued to expand, both economically and socially, under the rule of the Karakhanids in the 11th century, up until the invasion by Ghengis Khan in 1220, and became part of the Timurid Empire in 1370.

However it was in the 16th century that Bukhara reached the peak of its prosperity and renown as a cultural, trading and religious centre on the Silk Roads. Conquered in the late 15th century by Khan Sheibani, a nomadic Uzbek tribal leader, the city went on to become the capital of the Khanate of Bukhara under the Sheibanid dynasty. As Sheibanid rule expanded and was consolidated over large areas of Central Asia, Bukhara was the first to benefit from this prosperity, and the majority of the most celebrated and striking monuments that distinguish the city today date from this period. Many of these reflect Bukhara's status as a spiritual and cultural as well as economic centre, such as the remarkable Poi-Kalyan complex, which consists of the Kalyan mosque, minaret and the Mir-i Arab madrassah. The Lyabi-Khauz ensemble similarly dates from this period, as well as the Kosh madrassah and the Gaukushon madrassah. The Taki Sarafon (Dome of the Moneychangers) and the Taki-Tilpak-Furushan (Dome of the Headguard Sellers) both hint at the vibrant commercial activity that was taking place in Bukhara in this period. The Magoki Kurns and Abdullaziz-Khan madrassah were added in the mid-17th century. This historic old town is in fact the most complete example of a medieval city in Central Asia today, and its well-preserved urban structure and striking medieval architecture, as well as the remains of many covered bazaars, all reflect the influence of the Silk Roads throughout the long history of Bukhara. 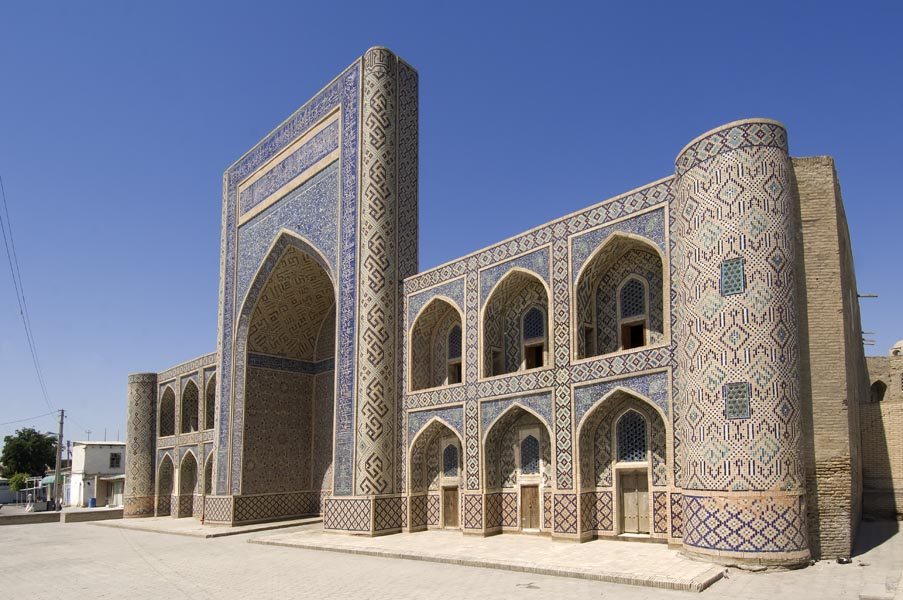 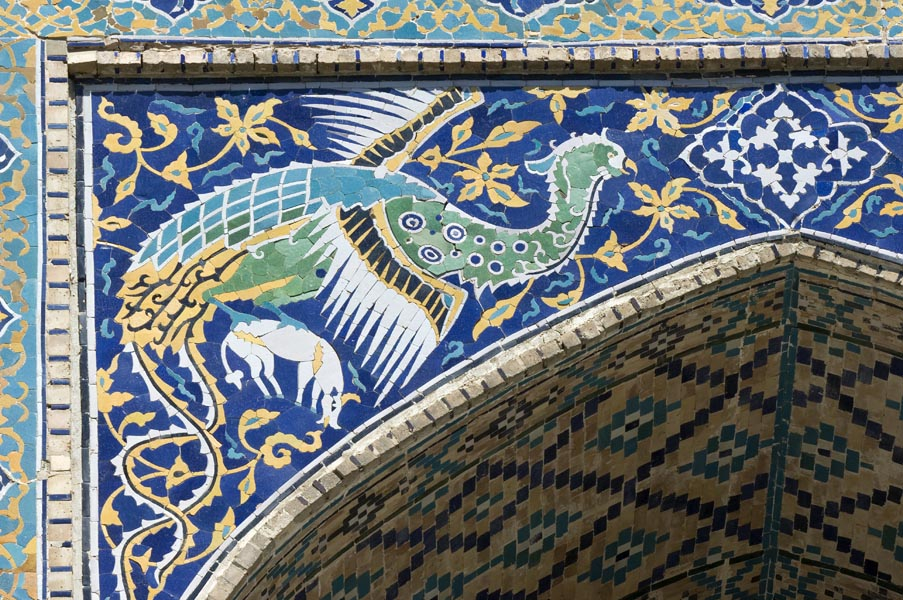 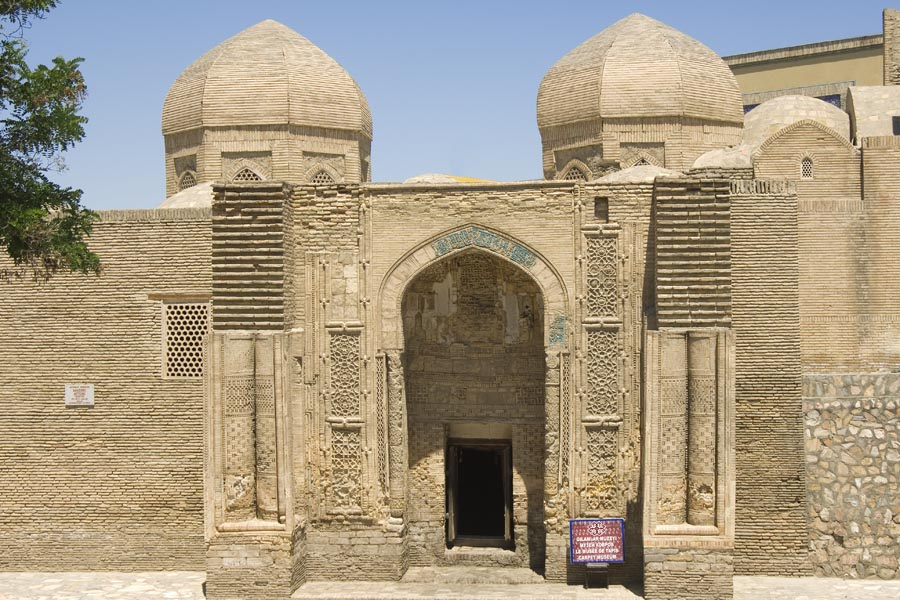 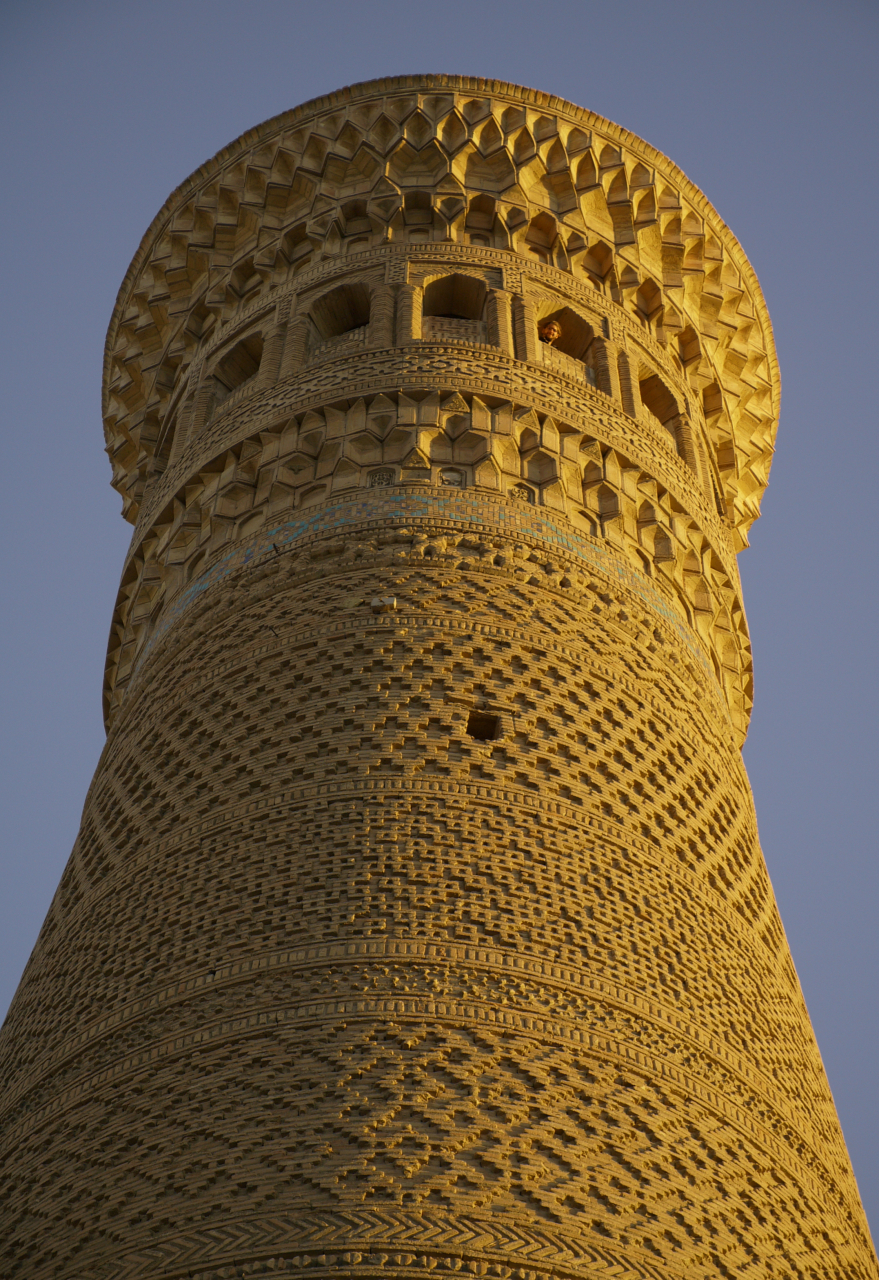 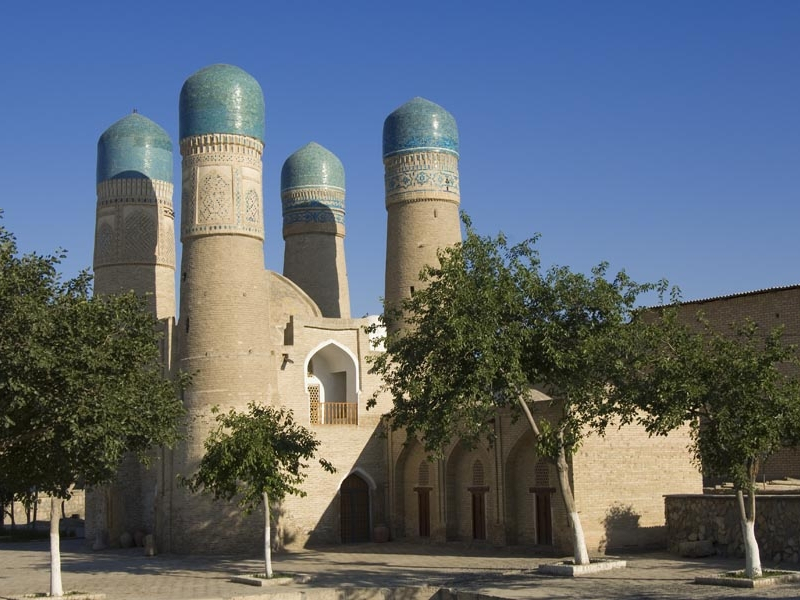