An ancient imperial capital and eastern departure point of the Silk Road, Xi’an (formerly Chang’an) has long been an important crossroads for people from throughout China, Central Asia, and the Middle East, and thus a hub of diverse ethnic identities and religious beliefs.  The central location of Xi'an in what is now the Shaanxi Province, near the confluence of the Wei and Feng Rivers, helps explain why the area was the site of several important imperial capitals for almost a millennium of Chinese history. The first unified Chinese empire, the Qin Dynasty (221-206 BC), had its capital just north of the current city, where the impressive tomb complex of the Qin emperors was discovered, famously containing more than 8000 terracotta statues spread over some 56 square kilometres.

The Qin were succeeded by the Han Dynasty (206 BC-220 AD), who began the construction of Chang’an. It was under the Han Emperor Wu Di (141-87 BC) that the first Chinese missions were sent to south-eastern Asia, central Asia and eventually even Rome, marking the beginnings of the Silk Road. Han Emperors substantially expanded the capital city, erecting many new palaces, but the glory of Chang'an came to an end in 24 AD with the collapse of the dynasty, and after looting and destruction, it subsequently fell to the status of simply a provincial city.

Chang'an was revived as the capital city in the 4th century AD, and witnessed a cultural florescence in part thanks to the fact that it became a centre of Buddhist learning. Several important Buddhist pilgrims and translators resided there in the early 5th century, among them Faxian, who travelled to India, and the scholar Kumarajiva. Following the accession of the Sui dynasty in 581 AD, the first Sui emperor decided to move the capital, and built an entirely new city just south of the original, on the exact location of modern Xi'an.

The city continued to be the principal capital of the Empire and entered the greatest period of its development under the Tang Dynasty (618-904), occupying some 84 square kilometres, with around one million inhabitants. The Tang period was noteworthy for the impact of Western products and fashions on Chinese elite culture, and the teeming markets of the capital played a significant role in the dissemination of such goods. Among the dominant figures in this era were Sogdian merchants from the region of Central Asia which encompasses today's Samarkand, who were vital agents in the transporting and trading of goods to China.

Under the Tang, the city was also a major religious centre, not only for Buddhism and Taoism but also for several religions which were relatively recent arrivals in China: Zoroastrianism, Nestorianism and Manichaeism. The most famous of all the Buddhist pilgrims, Xuanzang, brought copies of the Indian scriptures to the city, which he then translated. One of the few major Tang-era buildings left in Xi'an today is the Big Wild Goose (Dayan) Pagoda, first built in 652 AD, housing the library that Xuanzang collected. The current structure was re-built in 701-704; by climbing to its seventh story, which "rubs the blue sky's vault," a Tang poet Cen Shen felt he was able to "bypass the world's bounds".

The Japanese pilgrim Enin was in Chang'an in 840 and noted that there were monks from the "Western Lands" (apparently India) in one of the several hundred monasteries there, who still did not know Chinese very well but presumably were helping with the interpretation of Sanskrit versions of the Buddhist texts. He later described South Indian, North Indian, Ceylonese, Kuchean (Kucha in the Tarim Basin), Korean and Japanese monks among the foreigners in the city. He goes on to note that there were four teeth of the Buddha in the city, three of them having come respectively from India, Khotan and Tibet and the fourth from heaven.

The spread of religions other than Buddhism under the Tang Dynasty can be documented fairly specifically. A stele (an inscribed stone pillar) erected in 781 relates the introduction of Nestorian Christianity as early as 635 AD by Syrian priests. The text and carvings exhibit a syncretism of Christian and Chinese traditions. Zoroastrianism received some impetus when the last of the Sassanian (Iranian) princes Firuz took refuge in China in the 670s, having fled the Arab invasions. Manichaeism also was connected with the arrival of Persians at the Tang court as early as 694 AD.

However this atmosphere of tolerance and religious pluralism broke down in the 9th century, and disorder and looting accompanied the last years of the Tang Dynasty, as its power weakened in the capital. With the collapse of the Tang at the beginning of the 10th century, Chang'an decayed rapidly. However, it continued to play a role in Western trade and experienced a revival under the Ming, beginning in the late 14th century.

Undoubtedly it was in the Ming period that the large Muslim community in Chang'an really took root and its members became largely Sinicized. Muslim merchants arrived in China much earlier both by sea through the ports of the South China coast and from Central Asia, but their full integration into Chinese society came later. Although first built in 742, the architecture visible today in Chang'an's Great Mosque (the Qingzhen Dasi) dates from the late Ming period, for example, its entrance gate was erected in 1600-1629. In its arrangement of courtyards and purely Chinese-style architecture, the mosque is visual evidence of the degree to which there was a syncretism of Islam and Chinese culture. The inscription on the "One God Pavilion" is the Muslim declaration of faith "God is One" rendered in Chinese characters. The mosque as we see it today is located in a Muslim quarter of Xi'an, not far from the location of the western market whose merchants played an important role in the continuing trade with the West throughout the Ming and Qing dynasties, along the Silk Roads to Inner Asia. 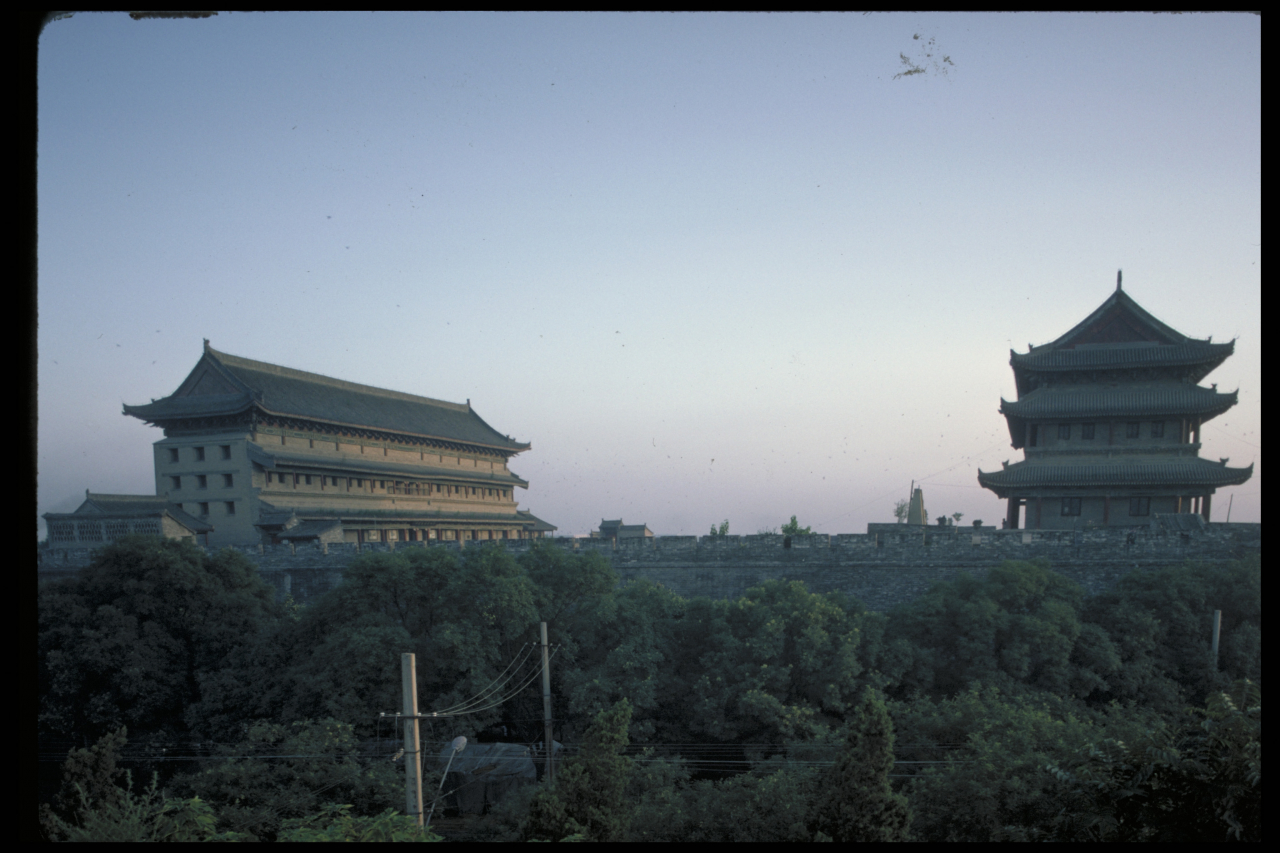 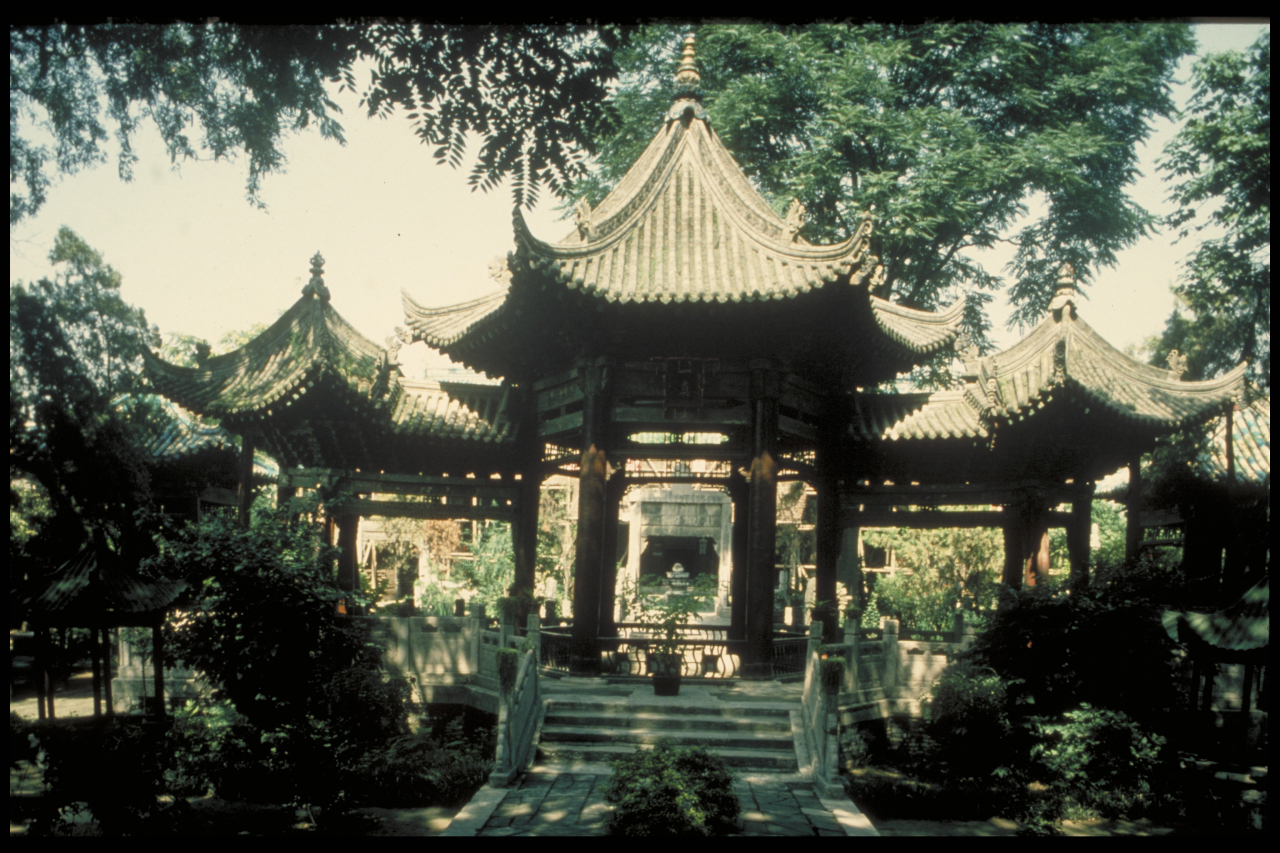 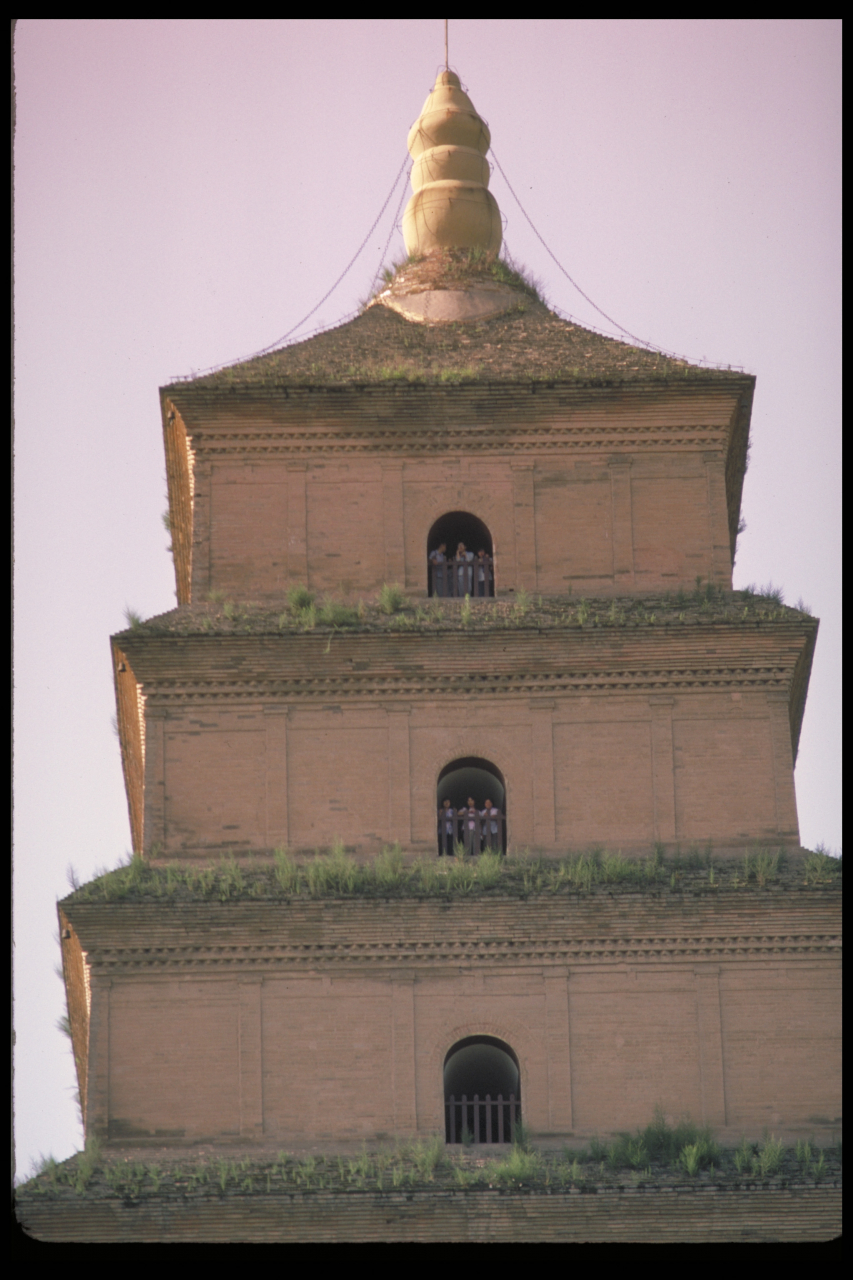 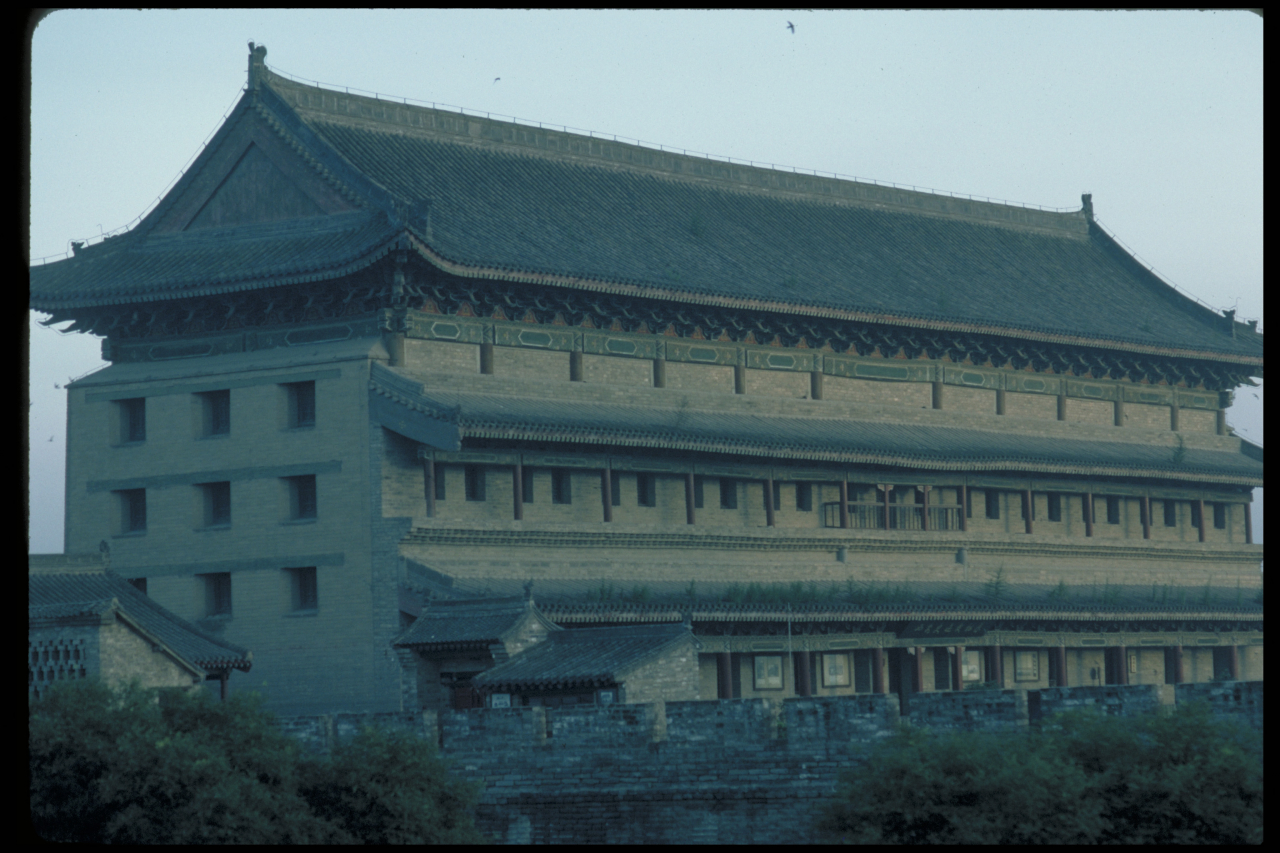 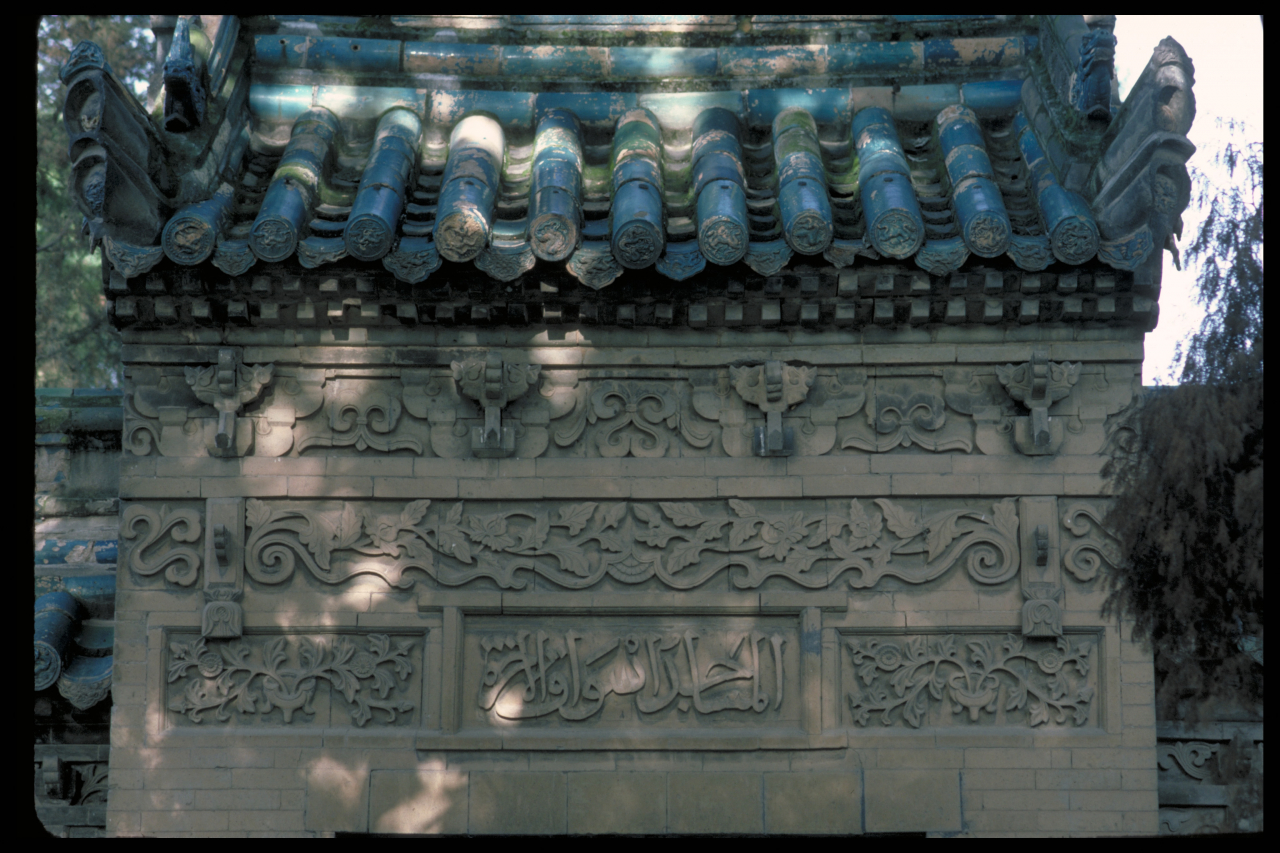 ©Nik Wheeler/Saudi Aramco World/SAWDIA / Detail from a gateway bearing an inscription in Arabic, at the Great Mosque of Xi'an
Previous Next