In bringing together the East and West the Silk Roads left traces in the political, economic, and cultural development of the countries through which it passed. Travelers, merchants and missionaries exchanged cultural, scientific, educational and spiritual values. Azerbaijan was on the path of the roads and made a significant contribution to the development of this global transit network. The goods and products of Azerbaijani towns and settlements spread along the Silk Roads and its towns had long been known to act as centres of culture, science and education. Oil, carpets, raw silk, silk fabrics, cotton, weapons, dried fruits, salt, precious stones, jewellery, alum, saffron, natural dyes, polychrome pottery, wooden utensils, non-ferrous metals, sturgeons, and caviar ironwood were the main exports of Azerbaijan. Bilateral land and sea routes linked Azerbaijan with China, Syria, India, Asia Minor, Iran, Egypt, Russia, the Arabian Peninsula, North Africa and Europe. The British laid their routes to India via Azerbaijan and Indian merchants traded in spices and cashmere fabrics in Baku and Shamakhi. Furthermore, Baku formerly served as a transit point for goods passing from China and India through the Black Sea to Constantinople. The Silk Roads pass through several cities in the north-western direction. Baku, the capital of Azerbaijan, located a the crossroads of the East and West, has remained the main administrative, political, cultural, ideological, handicraft and trade centre of the region. The city is also a major seaport. A 1375 Catalan map highlights the Caspian Sea as “Sea of Baku”. The 13th century sea fortress “Sabail” in the Bay of Baku guarded the entrance into the port city. Within the capital and its surroundings numerous buildings from the days of the Great Silk Roads are preserved, for example the “Icherisheher”, the old city, which contains the 15th century Palace of Shirvanshahs, Maiden Tower – a unique monument of the 5th-12th centuries, as well as mosques, caravansaries, baths, mausoleums and madrasa. The ‘Walled City of Baku’ including Shirvanshah's Palace and Maiden Tower is inscribed on the UNESCO World Heritage List. The temple of “Atashgah”, erected by Indian followers of Zoroaster, known as Parsi, is another wonderful example of the intercultural exchanges in the city. Atashgah or “Fire Temple”, a castle-like religious temple in Surakhani, was a site of pilgrimage and a philosophical centre for fire worships. According to the Persian and Indian inscriptions, this temple was used as a Hindu, Sikh and Zoroastrian place of fire worship. The Gobustan Rock Art Cultural Landscape, also inscribed on the UNESCO World Heritage List, is a rock art cultural reserve covering areas of a plateau of rocky boulders rising out of the semi-desert of central Azerbaijan, with an outstanding collection of more than 6000 rock engravings bearing testimony to 40 000 years of rock art. The site also possesses remains of inhabited caves and settlements and burials dated from the Upper Palaeolithic to the Middle Ages.

The city of Shamakhi played an important role in the international silk trade and was a major commercial centre. Merchants from all over the world would frequent its numerous bustling bazaars. Commodities exported from Shamakhi included silk, carpets and rugs. According to the testimonies of travellers, Shamakhi supplied the best silk, which was used to produce fabrics such as brocades, darai, diba and zarbaft. The city was also famous for its wine, exported to Western Europe. Basgal (an Ismayilli region) is one of the oldest settlements situated on the Silk Roads and in the 16th-17th centuries it was an important silk-weaving centre. The other distinctive feature of Basgal was its sophisticated sewage system developed in the Middle Ages and which included a bath in every household. Lahij is a monument of the ancient urban and architectural art, protected by the state. Lahij is a well-known craft centre for the production of cold steel arms and copper ware decorated with engraved designs. Gabala, a city that was well known 2400 years ago, was surrounded by strong defensive walls, from behind which palaces, houses of the nobility, pavilions, bazars and places of worship were built. The city was famous for silkworm breeding and horticulture. Shusha, located in the centre of Karabakh region, is a unique town that has left an enormous cultural heritage, both tangible and intangible. Situated in the strategic and economic part of Karabakh, it became the capital of the Karabakh Khanate. The town was surrounded by stone walls with round towers protecting the gates. The khan and his court lived in a rectangular citadel surrounded by bazaars, a Friday Mosque, and residential quarters. Each quarter was centred around a mosque surrounded by small squares containing a source of drinking water. Town estates incorporating a garden and vegetable plot were separated from the street with stone walls. The southern part of Shusha has a very famous plain called “Jidir duzu”, which used to be the main location for festivities and sporting events, such as Chovqan or Chovken, a traditional Karabakh horse riding game, now inscribed on the UNESCO Intangible Cultural Heritage List in Need of Urgent Safeguarding. Shusha was famous for its trade in carpets and silk products. The city of Sheki, the architectural reserve of the country, is one of the most ancient cities nestled in the foothills of the Caucasus Mountains. The citadel and the Khan’s Palace built between the 18th and 20th centuries are situated in the historic centre of the city. The historic centre, with the main shopping street, public buildings, bath houses, shops and workshops, silk production factories, cooperatives, and individual residential houses, has retained a historic townscape of high quality and authenticity. In the northern part of the city, there are ruins of the once impregnable fortress “Galarsan-gorarsan” (“Come and See”) dated to the 15th-18th centuries. The upper and lower caravanserais were built in the 18th century. Here people travelling along the Silk Roads would trade, as well as stay overnight and rest their pack animals. With the spread of Christianity, early Christian Albanian churches appeared in the city and its surroundings. The best known temple is located in the small mountainous village, of Kish (1st-2nd centuries). Other architectural treasures of Azerbaijan include its ancient bridges. The most famous of which include “Sinig Korpu” in Gazakh district, and the Khudaferin bridges across the Aras River in Jabrayil district. These bridges used to serve as the main route for the migration of different peoples and ethnic groups and represent one of the key components of the Silk Roads.

Since ancient times, Azerbaijan has played an important role as a melting pot of civilizations, serving as a venue and major transfer point of different cultural traditions and customs. The intangible heritage of Azerbaijan, diverse and rich, continues to be transmitted from generation to generation. From a cultural and historic point of view, Azerbaijan has close ties with the history of the Silk Roads and was strongly affected by its development. One point of reference for this strong link between the Silk Roads and Azerbaijan is the poem “Seven Beauties” by the great poet Nizami Ganjavi (1141-1209, Ganja, Azerbaijan), in which he allegorically describes the countries lying along these great Roads. Azerbaijan’s location on the Silk Roads promoted the growth of the handicraft industry in the country and by 1834 there were more than 400 crafts shops lining the streets and bazaars of Sheki. Among the products manufactured in Sheki that are unique to the Silk Roads, are “tekelduz” – embroidery featuring coloured thread silk tambour on dark velvet made with a special needle called a “garmach”. This embroidery method is also used across Central Asia and the Middle East, however the “tekelduz” made in Sheki are distinguished by their design and embroidery technique. A variety of crafts were developed in Sheki, like blacksmithing, weapons manufacturing, silk weaving, decorative and artistic shabaka, jewelery items, silk and artistic embroideries. Another famous handicraft product are ‘mujrus’, small wooden trunk boxes. Mujrus were used by women to store jewellery or embroidery thread. These small boxes are made of local hardwoods, such as chestnut and walnut, and are decorated with hammered copper. Since ancient times small “mujru” boxes have remained the major attribute in the dowry of brides from this region. Rooted in traditions found along the Silk Roads, the art of Kelaghayi is concentrated in two places in Azerbaijan - Sheki and Basgal. “Kelaghayi” is a woman’s headscarf and is made of thin silk threads with specific colours tied to specific social occasions. The art of making Kelaghayi is transmitted exclusively through non-formal apprenticeships and is primarily an intra-family occupation. The traditional practice of making and wearing headscarves is an expression of cultural identity, religious traditions, and serves as a symbol of social cohesion, reinforcing the role of women and strengthening the cultural unity of Azerbaijani society. Carpet-weaving is another popular traditional craft in Azerbaijan. The patterns of Azerbaijani carpets are characteristic of the various regions of the country. Carpet making is also a family-run business tradition, transferred orally and through practice. Carpet weaving is closely connected with the daily life and customs of the communities involved, its role reflected in the meaning of the designs and their applications. Thus, the carpet is widely used for home decor and furniture. There are special carpets woven specifically for medical treatment, wedding ceremonies, the birth of a child, mourning rituals and prayer. The carpets are also used by young girls who sit on them while telling fortunes and singing traditional songs during Novruz. Celebration of Novruz Bayram (the regional New Year) on the occasion of the 1st day of spring is a key tradition that has been transmitted along the Silk Roads. The celebration travelled widely, from Central Asia to Turkey by passing through, the Indian sub-continent, Afghanistan, Iran, Azerbaijan and other countries. Novruz is associated with various local traditions and numerous tales and legends. Songs and dances are common to almost every region, as are semi-sacred family or public meals. Novruz promotes the values of peace and solidarity between generations and within families, as well as reconciliation and neighbourliness, thus contributing to friendship among peoples across various communities. In the field of sport, the traditional wrestling, Gulash, is a common activity among Silk Roads countries. Today Gulash tournaments are accompanied by music, as they would have been in ancient times, normally by the sounds of the traditional wind instrument called zurna and the rumbling of drums. The wrestlers of Gulash are known as pekhlevans. During Novruz Bayram, pekhlevans prepare impressive shows to demonstrate their living art and tradition.

The country has passed various stages of spiritual life over its long history. Initially it was dominated by beliefs and cults, then by Zoroastrianism, which was replaced by Christianity in the 4th century. Since the 7th century, most of the country’s population has practiced Islam. Azerbaijan is a perfect example of the country with high levels of religious tolerance. Nowadays, as there has been throughout history, along with mosques, there are synagogues, Christian churches, and Zoroastrian temples. Tolerance is a feature that was reinforced during the times of the Silk Roads. Theatre in Centre of Baku City 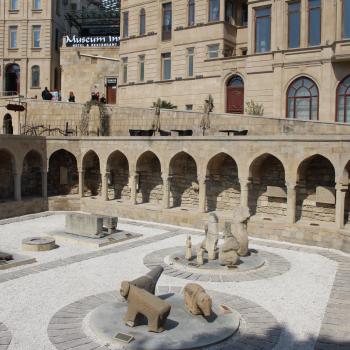 Ex-communist architecture from the USSR in Baku city centre 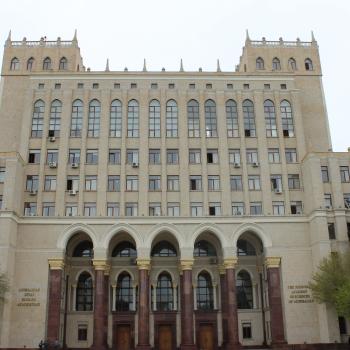 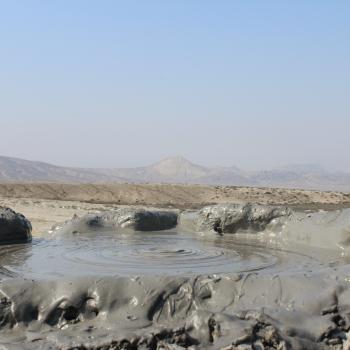 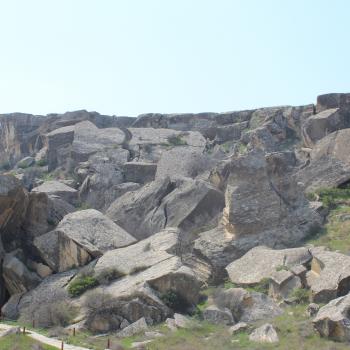 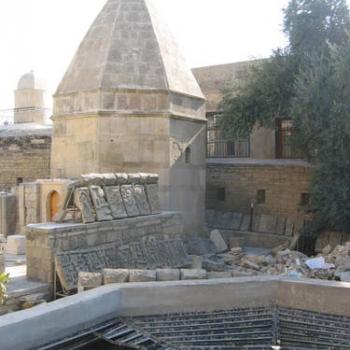